More About The Writing of Hilary Mantel

This is Hilary Mantel's latest book. 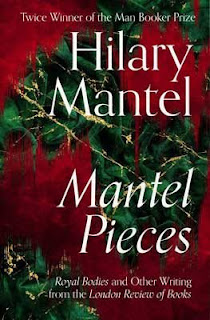 It's a collection of essays from the London Review of Books spanning a period from 1987 to 2019, with some reprints of emails and other communications between Hilary and the editor of the LRB. It's fascinating, among other things, to trace the development of communication from handwritten letters (1987 to 1997), through the invention of the fax (1994 to 1999) and finally the ubiquitous email from 2001 to the present.

There's much to say about this book. In numbered order of occurrence:

1. On the opening page, I burst into tears.  This intrigued me, as bursting into tears was the reaction HM reported on first encountering the inspiration for "Wolf Hall".

2. On finishing the first few pages, the introduction, in fact, written by HM, I immediately asked for a subscription to LRB as a Christmas present.  Elder daughter was happy to oblige and I am now signed up,

3. HM's writing is incredibly good, and having delved (as I am now permitted to do) into the LRB archives, I can say it stands above almost everything else I have looked at.  I would go so far as to say that HM could write a comparative study of toilets and I would most likely find it readable, engaging, fluent and thought-provoking.

4. The cover refers to a 'famous', and definitely controversial piece: "Royal Bodies, From Anne Boleyn to Kate Middleton" which was written in 2013. This alluded to Kate Middleton as more or less merely a clothes-horse, but in more unflattering terms; "a jointed doll on which certain rags are hung...."

Like the other essays, "Royal Bodies" ranges widely, covering Anne Boleyn, Marie Antoinette, Princess Diana, Her Majesty the Queen. (At a Palace reception, HM hid behind a sofa for much of the party). There is also a cogent explanation for why Henry VIII needed to have six wives, and a summary of recent research which promises an explanation of why Henry VIII's wives could not bear him the son he craved.

The press, however, on its first publication, homed in on the Kate Middleton "insults". Journalists patrolled the streets of Budleigh Salterton trying to find HM's home so that they could attack her. She tell us that "The neighbours wouldn't help them - in Budleigh Salterton we don't engage with vulgarians." The Prime Minister and the leader of the opposition denounced her.  There was a brief firework display of outrage and misunderstanding before it fizzled out, eventually.  However, the editors, seeking sales, obviously thought it best to draw attention on the cover to what they clearly feel is the most striking essay in the book.  It's a pity, because if there is one thing HM is NOT, it's a sensationalist writer. This is not the most important piece in the book.

5. The collection lends extraordinary insight into the development of HM's novels.  It is really true, as I wrote in my previous post, that the work took fifteen years to write.  There are essays on characters from Wolf Hall: Jane Boleyn, Charles Brandon, Margaret Pole.  These are replete with the learning HM accumulated from her years of research, lending further insights for those, like me, who are suffering from withdrawal symptoms and cannot come to terms with the idea that the trilogy will not be followed by a fourth novel.

6. There are further insights into an earlier book, also  contender for the Booker Prize, but not a winner. "Beyond Black". This is a deeply dark, beautifully written and perfectly constructed work which I have read twice.  The first time, shortly after its publication in 2005, I had barely heard of HM, and read it as a page-turner.  Revisiting it recently, I realised that I had not fully understood the denouement, or the links between the devils and Alison's childhood, and had certainly been oblivious to much layered nuance about modern life.

The essay in 'Mantel Pieces' called "The Dead are All Around Us - Britain's Last Witch" (published as a book review in LRB in 2001) is a flag-waver and foretaste for "Beyond Black". Whether HM wrote it as she was researching the seedy world of spiritualists and those who conduct seances for a living, or whether, on being asked to review the book in question, she realised what an incredible story this was for a novelist to explore, I do not know.  As she follows the life of "Hellish Nell: Last of Britain's Witches" by Malcolm Gaskill, (published 2001), she zones in to create a working construction of the character who will become Alison.  Alison is the protagonist of "Beyond Black", a lonely, overweight, unwell but strangely convincing professional medium who touts her trade around weekend "Psychic Fayres" in out-of-town motels, in "the banqueting annexes of steak-houses and the hospitality suites of non-league football clubs".  She has associates - these are a cohort of practicioners of the psychic arts: tarot card readers, palmists, purveyors of crystals for healing, with name cards like "Tanya, or Lilia" ... "all of Russian descent" although "it is true their accents often suggest an eastern derivation: Essex".  All these quotes are from the 2001 essay, but sound like a first draft and synopsis for the 2005 novel "Beyond Black".

Nell, (Helen Duncan, born early in the 20th century in Scotland, exact date uncertain ) first experienced clairvoyant experiences at the age of seven, and developed "crippling diffidence, timidity, and passivity" characteristics entirely appropriated by the fictional character of Alison, whose childhood likewise saw the first of her supernatural experiences. Both grew up to earn their living "as the mouthpiece of dead people: travelling the roads of Britain" .... Helen was "sustained by tea and endless cigarettes, her parasitic husband in tow" (for Alison it was her hard-as-nails business manager, Colette),  "her [Helen's] heavy body always sicker, and apt to take on the sicknesses of other people..." (In Alison's case, she was likewise very overweight, and unwell a lot of the time as she travelled). HM notes and uses in her novel, Malcom Gaskill's observation that "spiritualism was a theatrical spectacle that .... drew on farce, burlesque and vaudeville" In "Beyond Black" this makes for brilliant storytelling, as the medium, Alison, displays such a convincing blend of trickery (suggesting and planting ideas in her subjects) and realism, "Your mum likes your new kitchen units" and then arrows in with an insight which has you believing that she truly does have psychic powers.   There is much, too, to say on the subject of Helen's "spirit guides" - a dead person who returns in spirit and through whose voice the medium would speak.  Alison's range of spirit guides are truly awful ghouls, "the fiends", she aptly calls them, who haunted her childhood, committed unspeakable crimes, and make her life a misery until the end of the novel, when there is a redemption, which I missed the first time I read it.

By the end of the piece, it appeared to me that HM is already seeing Alison, when she writes: "It is a sad thing to see a medium hyperventilating, trembling, running with sweat, gasping out messages from the ancestors to the gormless deracinated teenagers of the Thames Valley, who are too ignorant to know their grandparents names or where they came from." (This exact situation occurs in BB). It is truly awe-inspiring to follow a creative mind at work in this way.