About the woodland I will go

To see the cherry hung with snow. 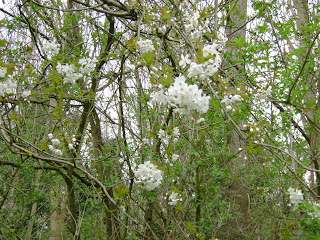 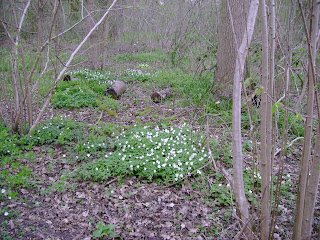 The wood in spring.

Improvements and Moving On

Spring is here, buds are emerging, the goose is sitting on her nest, and the wood is full of silver and golden celandine.  I went out with my camera to take pictures of the blossom for my blog, but the camera didn't work, even with new batteries installed.  Disappointing.

Younger daughter came home from her ski season on Sunday, after an overnight coach journey from the French Alps.  We were a little concerned, but I figured that lightning would not strike twice.

She looked really fit and well, has lost some weight, and generally seemed in control and putting the whole thing in perspective, and now looking forward to the next episode in her life.  She will be flying to Perpignan a week tomorrow where she has a job cleaning caravans.  Each to their own.

Now that the excitement is over, I am realising yet again how much the girls have grown in independence this year, from working abroad.  I knew that this would be the case, but even so, it is hard to completely accept that they are no longer my treasures.

I must find other things to occupy my mind.

I am currently reading "The Seven Basic Plots" by Christopher Booker. Apparently every single book ever written can be categorised by one or more of these.  Some books greedily use three in one go!

More information About The Old House


The one that looked just like the Bronte parsonage, that is.

Well, the house was like the parsonage in that it was built of stone which had weathered to that black colour, so different from the golden honey-coloured stone of towns in the Cotswolds and Northamptonshire.  Due to the Dark, Satanic Mills, of course, the proximity of industrial activity.

It was about the same size and shape, being quite squat and more than one room deep, again unlike Northamptonshire vintage stone properties, which tend to be only one room thick until extended.  Chimneys and windows all a bit old and wobbly in our case.

UNLIKE the parsonage in that it was set on a corner of two main roads, therefore not at all peaceful, and positioned between a pub and a chip-shop on one side, and a housing estate on the other.  Therefore a lot of litter and worse ended up in our gateway.

The first thing we had to do was put on a new roof, (which we installed with the help of a council grant).  Next there was the fact that it had no central heating.  A house with stone walls a foot thick does take a long time to heat up, and, contrary to popular myth, cools down again very quickly.  So husband designed a system with the help of a book called "Install Your Own Central Heating", and fitted it himself.  OMG, he was so young and energetic then!  I remember that every floorboard in the house (or so it seemed) had to be pulled up.

I recall another epic row about food, this time a roast dinner I had cooked (again, very proud of it, saw it as a work of genius).  I was furious that husband did not immediately down tools to come and eat it at once, but rather carefully finished what he was doing.  OMG, I was so young and spoiled in those days!

The house had previously been occupied by an elderly couple and their even older mother, plus her two small dogs.  After about thirty years of the couple's constant smoking the walls were all yellow and streaming with nicotine, and the carpets stank of it.  Also the carpets (1970's shag pile) were full of dog hair.  We had nothing to spare for re-decorating or new carpets.

As soon as we moved in, everything started to fall apart.  You know how in your own house, there is a special way of doing things, like turning a door handle, to avoid trouble? All the door handles fell off under our callous hands, and the ancient gas heater in the kitchen packed up altogether.

Then there was the drainage.  A mains water pipe was leaking in the back garden, and the house  clean-water system drained into a soakaway under the street outside, so no washing machine could be connected until mains drainage had been installed.

The mice were despatched by next-door's cat, the most efficient method I have ever seen.

Another memory I have is of being woken in the middle of the night by our next-door neighbours entering our bedroom.  In those days we both slept completely naked, so it was quite embarrassing!  Luckily Mr Next-Door worked for a brewery so they both had a great sense of humour, and were used to late nights.  Our burglar alarm had gone off, and our stone walls were so thick we had not heard a thing.

In the kitchen (which consisted of an ancient cooker, sink and some 1950's formica cupboards), there was a large chimney breast which had once held a range and after that an Aga.  Both long gone, but had left a big problem.  The Aga fumes had caused the mortar to disintegrate and the chimney breast was in a state of collapse.  Husband's building background again to the rescue, he got some Acro-props installed to hold it up.  I am not sure what was supposed to happen next, but what did happen was that he was offered a job move 100 miles further south, with a payrise and company car.  We decamped, and put the house on the market.

Amazingly, someone bought it, complete with Acro-props and drainage problems.  I think the fact that he had no wife was probably a critical factor.  I can't imagine any wife agreeing to buy the house in the state it was in.  He had been widowed,  and his mother lived in the housing estate a few hundred yards away, which made the house a useful proposition.

We later discovered that he dug the channel and fitted the pipes to connect to mains drainage himself.

On moving to the East Midlands, we spent more than a year living in rented accommodation, determined never again to make the mistake of falling in love with a totally unsuitable house.  Eventually we picked a brand new box, which, while ugly from the outside, was warm, clean, easy to run, and equipped with state-of-the-art plumbing and heating.  A perfect place to bring up a young family, which we then proceeded to do, and we are still here to this day!

A post on Caked Crusader has led my mind to dwell on the subject of husbands and cake.  I have been married to my husband for a long time, and we have been a couple for 35 years.

One event in particular sticks out in my mind, on the subject of husband and cake.

Very early on, when we bought our first house together, we were quite naive and romantic.  We bought an old stone house which looked very like the Bronte's parsonage in Haworth.  The house was in a suburb of Leeds which was very unfashionable then, and had structural problems, which is why we got it quite cheap.

One of the problems was that it was absolutely freezing cold.  It had no loft insulation, and no central heating.  There were also mice.  Even our house was warmer for the mice than a hilltop between Leeds and Bradford in winter.

The first year we were there, I went to some considerable trouble to make a Christmas cake.  I was quite proud of this, not being a particularly domesticated young woman in those days.  (I remember scoffing when I first read Shirley Conran's book "Superwoman", that this book was" all about housework", and I did not intend to do any!)

Husband, looking for anything near to hand to put into a mousetrap he was constructing, broke off a corner of the beautiful untouched cake I had made, thus ruining it for icing.

It took about twenty years for me to get over this and these days, I do not make a Christmas cake.  He does, or we don't have one.
Posted by sensibilia at 17:18 2 comments:

Skype calls with both daughters over the weekend.

Apparently it is +14 degrees in the ski resort.  I asked younger daughter why snow was not melting.  She didn't know.

Mr BB and I set off at 7.00 am on Easter Sunday (our body-clocks were saying it was 6.00 am) to drive to elder daughter's flat to clean it.  (She has been in Brussels since October). The car gave the exterior temperature as -4 when we set off, and plus 5 at the end of the day on our return.

So "Freezing", which used to be short-hand/exaggerated complaint for any temperature which was not 20 degrees plus, is, in this case, scientifically accurate.

"The spring is just not arriving," I continued.  "The birds are not singing, the buds are not coming out, and the geese are not nesting."

At this, younger daughter burst into howls of laughter and said she had to relay my news to her work-mate as soon as possible.

I didn't understand what was funny.  Apparently it had to do with the geese.