As you age, you realise that not all the authors you were taught to revere are actually worthy of reverence.
Two good examples of this now follow:

(i)  The Mitford Sisters

This is a Fun Biography which makes the Mitfords seem like a great laugh, and worth all the media attention they've enjoyed over the hundred years since the youngest one was born (Deborah, late Duchess of Devonshire, 1920 - 2014). 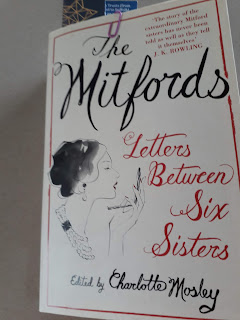 This is a very different work, edited by the daughter-in-law of Diana Mosley (née Mitford).

It's hard to get past the copious and serious notes explaining who all the characters are. Many, if not most of them are labelled with ridiculous nicknames, like Bobo, Boud, (Unity, daughter #4), Nardy, Honks,  (Diana, daughter#3), and Dawly (Deborah, #6, known even to the public as Debo).

The sisters, beside their silly nicknames and childish secret languages, communicated in wildly over-elite phraseology, calling each other "darling" at all times, and sprinkling superlatives, italics and capitals liberally.

What's more disturbing is the political allegiances of the two fascist daughters, Unity and Diana.  Now that we are seeing the resurgance of political movements we had considered consigned to the dustbin of history after the defeat of Germany in 1945, it is particularly distasteful to read of these privileged girls using their positions and connections to influence public opinion in favour of Hitler.

It ended badly for poor, impressionable, silly Unity, who shot herself in Munich on 3rd September 1939, the day that Britain and France declared war on Germany.  She was brought home by her mother and Deborah. With the mental age of a 12-year-old, brain-damaged and unpredictable, she became a severe burden on her mother who cared for her for the rest of her life.

Diana, who left her first husband to live with the British Fascist leader Oswald Mosley, was imprisoned for 3 years as an "exremely dangerous and sinister young woman", (in the words of the Home Office official who signed her detention order).  Mosley had already been imprisoned as a threat to the country.  Both were released in November 1943, and kept under house arrest for the rest of the war.

The biography somehow manages to make it all seem rather a jolly jape, the letters give a true indication of the nature of the personalities.

I never particularly liked this woman, but felt that, as she was a famous feminist and the author of the renowned "The Second Sex", I should read her.  I never got far with "The Second Sex", finding it, exactly as with Germaine Greer's "The Female Eunuch" terminally depressing, to the point where, I felt, anyone who truly believed these things would probably commit suicide.

So no copy of it exists on my bookshelf.  However, I have a comprehensive biography.


I also have a book about Simone and her sister, and ten assorted works including stories, memoirs, and novels.  I've read all the fiction works and memoirs, but can't say they added to the sum of my happiness in life.

All display in varying degrees the self-obsession, stridency, selfishness, and manipulative characteristics of this famous feminist.

This first volume is followed by two more tomes all about herself and her feelings about everything and her thoughts.  Unfortunately, the "novels" are all cast in much the same mould, intensely self-absorbed, and almost devoid of interest in anyone outside the narrator/heroine and her immediate circle. 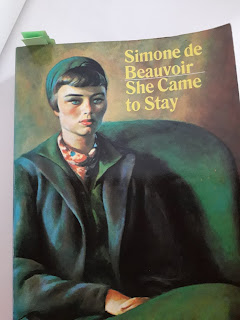 This is a sinister-looking woman.  The picture credit states that it is "Yvonne in Green Dress", by Guy Pene Dubois, held in The New Britain Museum, Connecticut.  The high cheekbones and cropped dark hair give the depiction a striking similarity to  young woman called Olga Kosakievicz.  She was a White Russian emigré, nine years younger than de Beauvoir, and, as an emigré, was lacking in confidence and vulnerable.  She was de Beauvoir's student at the lycée in Rouen.  The simplicity with which the biography (published 1990) tells the story is hardly credible today. In our era, seduction of, and sexual relationships with, any student by a teacher, confer prison sentences.    De Beauvoir groomed the girl and introduced her to Sartre, her own lover, who began a sexual relationship with her.  The "novel" is a thinly disguised account of this three-way relationship.

It was not just Olga.  The biography states that "this was the first of a succession of intense friendships Simone de Beauvoir formed with her students, all of whom subsequently acquiesced to sexual liaisons with Sartre".  'Acquiesced!'  A subtle, nuanced word, indicating that the author, Deirdre Barr, was well aware that the relationships had a coercive element.  The force of Sartre's personality, and that of his mistress, would have provided an irresistible current of force.

Another student, Bianca Bienenfeld, also vulnerable because she was Jewish, wrote a memoir years later in which she fully acknowledged modern sensibilities of the criminal dimension of these teachers and their relationships with students.  It all looks very different when you strip away the hero-worship of the feminist icon.

Now that I am older, I realise that my initial distaste, which I could not fully analyse, was well-justified.  My existentialist collection, consisting of ten fiction works, two biographical, and three works by or about Sartre, is no longer of interest to me.  I have earmarked it for a clear-out.  The Mitford books will also be part of a clear-out.  No more time for these flawed heroines!