Shakespeare  as ever so succinct, so evocative, captured  scenes like this when he wrote of the:

It is a striking thought that Shakespeare, whose parents had lived through the Reformation,   was already seeing ruins, only one generation from the dissolution of the monasteries.  Time did not dissolve these walls, they were deliberately hacked down and the roofs torn off to hasten internal decay.


"Bitter, bitter oh to behould
The grasse to growe
Where the walls of Walsingham
So stately did shewe.

Such were the works of Walsingham
Where she did stand
Such are the wrackes as noe do shewe
Of that holy land.

Levell levell with the ground
The towres doe lye
Which with their golden, glittering tops
Pearsed once to the sky."

Philip Howard, Earl of Arundel was the son, grandson and great-grandson of men attainted for treason.  His great-grandfather, the third Duke of Norfolk, escaped death, (the fate of the other two) only because Henry VIII died in the night as the Duke was awaiting execution the next morning. The latter then spent the whole of the reign of King Edward VI imprisoned in the Tower of London, to be released on the accession of the Catholic Queen Mary.

Philip, a Catholic martyr, was also attainted for treason, and spent six years in the Tower awaiting execution, primarily for his Catholic faith.  He died of either malnutrition, dysentery or poisoning, (reports vary) in 1595 and was canonised by Pope Paul VI on 25th October 1970.

Walsingham had for centuries been a major centre for pilgrimage in England.  Every medieval king is said to have visited.

Henry VIII walked barefoot from the slipper chapel and offered a necklace of great value immediately after the birth of his first son, Prince Henry, on New Year's Day, 1511, and made two payments in the same year to the royal glazier for work in the Lady Chapel.  Tragically, the baby died soon after, on 22nd February at barely seven weeks old.

Katherine of Aragon, his first Queen, wrote to Henry on 16th September 1513, after victory over the Scots at the Battle of Flodden, that she would now go on pilgrimage to Walsingham, and was recorded as being present there on 23rd September.

The Abbey at Walsingham was destroyed by Henry VIII along with every other great religious house in England during the late 1530's, by which time much water had passed under the bridges of Henry's youthful idealism.

Walsingham has revived in the last hundred years as a place of pilgrimage.  There is both an Anglican and a Catholic shrine.

When I visited on 7th July, the Union of Catholic Mothers was on pilgrimage at Walsingham. I was impressed.  These ladies, many of them advanced in years, processed from the Slipper Chapel

to enter through the great monastery gate and hear a mass under the former eastern window, the last remaining stones of the former abbey church.
As a mere tourist I was humbled by their dedication, and wondered whether I should consider becoming a Catholic myself.  Then I remembered that my mother (who died in 1987, and is a very distant figure to me now) had been brought up as a Catholic, although she never spoke about it to me.  My brother, who undertook extensive research in family history, unearthed the details.
Perhaps it is not only the shape of a nose or the colour of hair which runs in families.
﻿
﻿
Posted by sensibilia at 13:31 No comments: 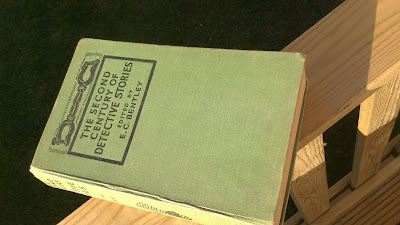 ﻿
Here is a book I picked up at a Sue Ryder shop.  It was outside in a box marked "two for £1". So old and rundown that it did not merit a place on the bookshelves inside.
(The other one I bought for the £1 was a slim paperback of Shakespeare's sonnets, a substantial section of which is printed upside down.  Odd).
The book does not have a date inside it, either in the opening print credits or in the editor's introduction, so I did not know from which decade it hailed.  I guessed the 1930's.  It does smell. This reminds me of my friend, who won't buy a second-hand book on principle because they don't feel nice, and they smell.  I will admit it doesn't feel nice.
I've since looked it up on Amazon and my guess was apparently correct, mid-1930's.
I bought it because I had a great friend many years ago who enthused about Bentley's book "Trent's Last Case", much praised as a classic detective story.
Further, I do love an old hardback, especially one from the 1930's.  And I do love a "dip-in and dip-out" type of book, which seems like ideal holiday reading.
The treasures within exceeded even my expectations.  There was a story by Ronald Knox, the uncle of Penelope Fitzgerald.  Penelope Fitzgerald made her name with a biography of all her uncles.  It is called "The Knox Brothers" and I bought it (of course) after reading the excellent biography of Penelope by Hermione Lee.  It's in a pile to come to later, in the winter I think.
I admit the detective story by Ronald Knox was not very good, but it is indicative of the snobbery and elitism of the 1930's, that if you were from the upper middle class, with an Oxbridge education, and preferably a man as well, you could get mediocre work published.
Another story is by GDH and Margaret Cole, a husband and wife team of elite 1920's academics, who are more usually noted for their socialist economic theories.  I had no idea that they also wrote detective stories.  Again, it is not particularly brilliant, but sheds an interesting light on their otherwise austere public image.
The best story I have read so far in this collection is by Dorothy L Sayers, still a classic author in print and still being adapted for TV and other media after all these years.
It is the only story which has so far made me want to read more by this author.  Oh, and one other thing, of course, is that Dorothy L Sayers was a contemporary of my great heroine, Vera Brittain.  They were students together at Oxford.
The common feature of the other selections I have read is that they are ALL set in one of three locations.  Either in an Oxford College or a gentleman's club or in the home of an eccentric old upper-middle-class gentleman.  This old gentleman invariably has a housekeeper or butler, lives alone and has been found dead, usually by the housekeeper/butler, who is immediately cast as a suspect.  Really it is a little bit tedious, and I stopped after reading four of these.  Another feature of the less well-written stories is that they make heavy weather of laying out the clues and the hindrances to discovery of the eventual murderer.
It's interesting to note this as a stage in literary development, though, a curiosity, and a little light entertainment from time to time.
The book is definitely holiday reading only, and I have put it aside for the time being. ﻿
Posted by sensibilia at 11:44 1 comment: