Reflections on the death of the Dowager Marchioness of Anglesey, died 21st Jan 2017

For four decades I have been a devoted follower of Vera Brittain, as earlier posts in this blog will testify.

Yesterday, I happened upon the wonderful free archive called Soundcloud, on which is to be found a 90 minute discussion held at The London School of Economics.  The two guests were Vera Brittain's biographer, and her daughter, Baroness Shirley Williams. 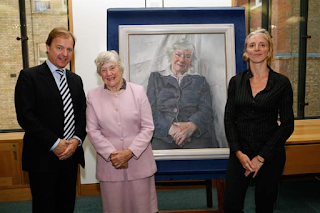 Shirley Williams is now 86 years old, (born July 1930), and speaks as forcefully and lucidly as she ever did.  The discussion was wide-ranging, and, as might be expected in a lecture programme which is named after the controversial Marxist philosopher Ralph Miliband (father of David and Ed),  drew some biting questions, the most critical of which had nothing to do with Vera Brittain.  Shirley replied astutely, calmly, and politely to all questions asked of her.

Shirley, now a member of the House of Lords in her own right, was educated at St Paul's Girls' School, then, as now, an elite private institution, and at Oxford.  This was a privileged education, notwithstanding that her father, George Catlin, stood in the 1920's and 1930's again and again as a prospective Labour Member of Parliament, and is acknowledged by Shirley as a greater influence on her political thinking than was her mother.

I find it quite taxing to ponder this question of elites.  Another female who has served the public in many roles and would appear, on the face of it, to be a member of an elite, has died recently.

Today, in The Times, (which unfortunately is behind a paywall), I read the obituary of the Dowager Marchioness of Anglesey. 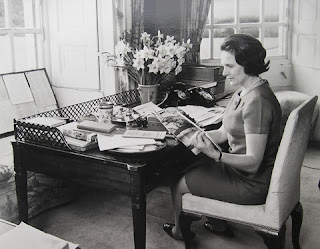 Picture credit The Womens' Institute
There are many links between these two women.

Both were christened Shirley.  Vera Brittain wrote that she called her daughter after Charlotte Bronte's "gallant little cavalier". Lady Anglesey was also, according to her obituary, named after CB's heroine.  Both were born to parents who had been deeply, and tragically, involved in the First World War.  Shirley Williams is daughter to the writer of the seminal "Testament of Youth".  Lady Anglesey was the daughter of the novelist Charles Morgan.

I have written extensively about Charles Morgan, and his links with Vera Brittain here.

Both Charles Morgan and Vera Brittain came from solidly middle-class backgrounds.  Charles's father was a President of the Institution of Civil Engineers, Vera's a successful manufacturer.  It was their middle-class success that paid for their children's educations, and the confidence of such a background led to first-generation success in letters and public life, and second-generation public honours.  Shirley Williams is a Baroness in her own right.   Lady Anglesey gained her title by marrying into the aristocracy, but was awarded CBE and DBE.  (Her Times obituary claims she was offered a peerage in her own right by all three political parties but turned it down).

So an elite education was a springboard to success.  And also, perhaps less controversially, it seems to have nurtured a devotion to duty, and to public service and to clarity of thinking.  These things are positive attributes which might be found in any member of the population, of course.

However, it is much harder to achieve a position where such attributes may be recognized if your parents and grandparents are from the lower levels of society. One of Baroness Williams' first points in the LSE lecture was about how the whole of the First World War, in the way it was staffed and the way officers and men were selected, was absolutely rigidly controlled by the class structure of the time.  She pointed out, this was far less so in the Second World War and subsequent wars.

Aside from the Army,  it is still true that if your parents and grandparents were from the working classes, even today you have to really struggle to make a mark in the world.  And if you don't make your mark, your habits of thought will not develop robustly in public debate.  And your contributions will not be used in public debate.  And they need to be. The more people who are thinking clearly and debating rationally, the better.

Lady Anglesey's obituary remarks that her "characteristic acumen, backed by charm, curiosity and assertiveness" soon brought her a number of public appointments, where her devotion to duty and to serving the public eventually brought the honours referred to above.  That's good, and the nation has undoubtedly benefitted.  It could benefit  more.

Others may have exactly the same personal qualities, but will never be heard of in public life. For example, my cleaning lady, who retired two years ago, held these same qualities but will never be asked to contribute to public debate. Nor would she ever have the confidence to embark on a career in local government, or volunteering, which are ways to start in public service.

There must have been, and still be, many hundreds of thousands of such people who are never heard.

This is why my thinking is conflicted on the subject of elites.  One can only regret the continued disproportionate influence of a privileged education. However, the existence of at least a few people possessed of robust common sense, a sense of right,  a concept of public duty, and an ability to make themselves heard, are better than none at all.

Posted by sensibilia at 12:41 No comments: