John Dee at the Royal College of Physicians

A free exhibition!  Here is where I went on Saturday.  The exhibition runs until 29th July.

First, a word or two about the venue. It's at the Royal College of Physicians' building, opposite Regents' Park.  A 1960's concrete grey, designed by Sir Denys Lasdun (who also designed the National Theatre, South Bank).  Most would say it's ugly, and out of place among its tall, creamy Regency neighbours.  However it is now Grade I listed.

The College as an institution was founded in 1518 by Henry VIII, in the days of his early, youthful idealism, before he started beheading people and generally behaving like a tyrant.  It has its own coat of arms, and was originally in a different building, probably much more attractive.  This is the fifth building the College has used as its HQ.

Free tours of the Medicinal Garden take place on Wednesdays.  This exhibition is also open free from Mondays to Fridays, 9-5.  The Saturday openings are by appointment, with a lecture tour.

The College owns more than 100 volumes that were stolen from John Dee when he went abroad in 1583, leaving his house and library in the care of his brother-in-law.  This was devastating to Dee, and although he recovered some of the books, many remained lost.  His library had, at its height, contained over 3,000 volumes. 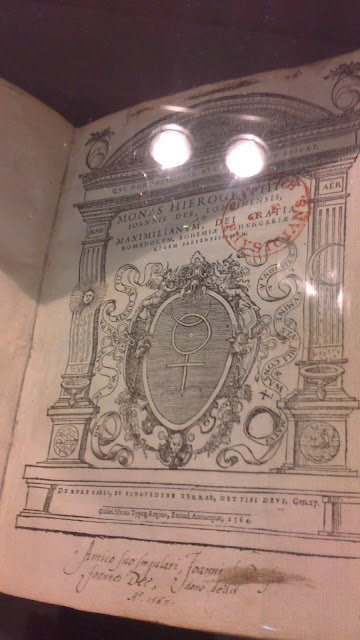 The books in the exhibition eventually passed into the hands of the College by donation from the family of the Marquis of Dorchester, after the latter's death in 1680.

The exhibition has also sourced artefacts associated with Dee from the British Museum and the Science Museum.

Dee was a multi-faceted mind, a genius who pioneered early mathematics, navigation, and astrology.  He is most famous for being a "magician", who spent much of his life in search of the "Philosopher's Stone" which would turn base metal into gold.

Favoured by Queen Elizabeth, to whom he acted as court astrologer, he died in poverty during the reign of her successor, James I.  James I was noted for hostility towards "magic", having written a book attacking witchcraft, and introduced statutes demonising "witches".

This was a most exciting opportunity to connect with the past.
Posted by sensibilia at 14:55 1 comment: