I've realised it doesn't matter if I don't continue to clear out my books and I don't get rid of any more of them. 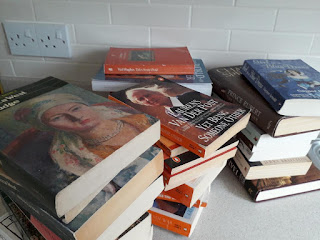 At first, I took photographs of the piles I was about to take to the charity shop, in case I missed them, or wanted to remind myself of why I was chucking them out. The pile above was one of my very early disposals, and I have never missed any of them. 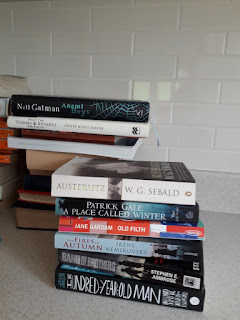 Similarly, this second pile of disposals has never been missed. 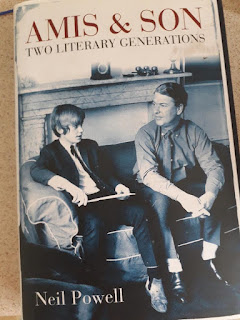 The Martin Amis dual biography, with his father Kingsley, did make me pause a little, hence it got its own picture, centre stage.  However, I have never thought of it since disposal.  I can't even remember which charity shop I took it to. There is more to say on this subject.

I had, initially, been taking them to my nearest charity shop, which I can walk to.  After a few trips, I noticed that none of my books were actually on the shelves. I enquired about this, and was told that, unless the books were in pristine condition, and particularly if paperbacks, as new. they would not be sold in this charity's network of shops.  What would happen to them, I asked, aghast.  If of vintage interest (I did not bother to find out what qualified as vintage, being so disgusted with what followed), they would go to the vintage branch shop. Everything else would be sent to poor foreign countries that need books, or be pulped.  That was my last visit to this charity, and henceforth I have favoured Oxfam, which takes anything and is grateful.  I have seen my books on their shelves, and they put their books in order properly. 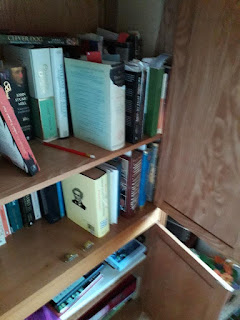 This is what my downstairs bookcase looked like before operations commenced.  It's still pretty much the same.  Some books have gone upstairs  - that brown one, third from right on middle shelf, is a case in point.  It is a biography of Lord Mountbatten. I read about a third of it, lost interest, but thought I might come back to it later, so it has gone from immediately opposite my desk to upstairs in the spare bedroom.  However, others have replaced it, so the shelf is still double stacked.  I am proud to own copies of historical biographies of Edward I, Edward II, Edward III and Edward V.  These are all now in the gap shown above.  I volunteer at a historical property which was built in the reign of Edward I, and occupied by the same family through the reigns of Edward II and III.  Edward V is not part of this collection, and I intend at some point to donate this book to the Richard III visitors' centre in Leicester, but as yet I have not felt ready to let it go. 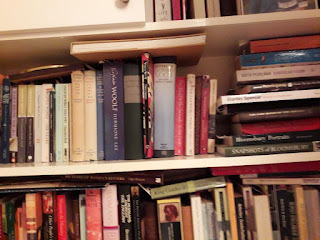 Above, this is what my upstairs bookcase in the spare bedroom looks like.  It contains four sets of shelves like these, all floor to ceiling, all double stacked. 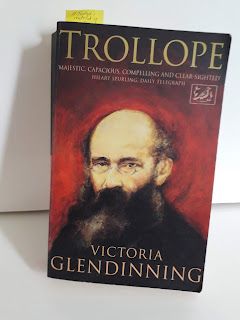 I have given some away to charity shops. The above biography is beautifully written, and I read and enjoyed it, but knew I would never need it again because I can't be bothered to actually read any novels by Trollope.  I find them too long and boring.  I might have persevered in my youth, when how to occupy the long hours of the day seemed a problem.  Now that I am not even working, but no day seems long enough for all I want to achieve in it, life is too short for Trollope. 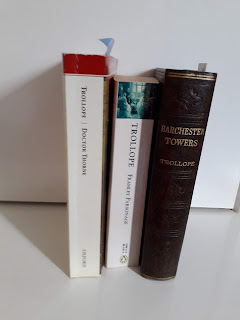 Here are the three novels which I gave away with the biography, all completely unread, and never regretted.

However, after several months of sorting and disposing, I realised I was becoming rather sad and unhappy.  Nothing else having changed in my life, I came to the conclusion that it was because I had chucked out enough, and should stop.  In fact, I concluded that I do not NEED to chuck out any more books.  I was scraping on a sore nerve by trying to find more books that I could do without.

I've got rid of all the ones which were completely painless, and the next tranches which I thought to get rid of were causing me pain, and making me feel regretful in anticipation.  Enough is enough.

This afternoon, I took back to the upstairs bookshelves three armfuls of books which I had brought downstairs ready to give away, but had found I couldn't get as far as doing so.  I already feel much better.  It's sort of the opposite of a purge.

If anything, what has been purged is the guilt about owning so many books, and the accompanying thought that I should reduce my collection. I feel a calm sense of satisfaction.