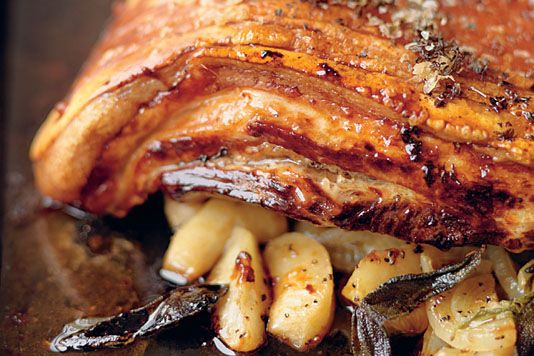 I usually keep my husband on a low-fat, high-fish content diet.  Occasionally he craves something really rich and fatty.  My friends tell me that their husbands are much the same, always ordering something with a huge plate of chips when they go out for a meal.  This week my husband was in craving mode, and plaintively asked if we could have belly pork.

So I thought I would have a day off cooking, and asked my husband would he cook the Sunday lunch on Saturday afternoon while I was out.  He said yes.

I returned to the house at 5pm to a kitchen full of black, acrid fumes, and the smoke alarm going off.

"Where's the smoke alarm?" he wailed in helpless man mode.  I ignored him, after all, he fitted it.

Then he opened the oven door, and sparks of fat burst out, catching into little flames.  I sighed.

Two hours later, after he had covered every work surface with a layer of greasy fat, consumed a fair quantity of alcohol, and created a pool of liquid grease in the floor of the oven, we sat down to eat.

The roast was delicious, but in my opinion, not worth all the effort.  It took me an hour to clean up the kitchen (excluding the washing up, which we did together).  After that we went to watch our recording of Strictly, and left the oven until the next morning.  It needed two cleans, so that was another morning's work.  So much for a bit of time off from cooking.

And never believe that the preparation time is 30 minutes and the cooking time 2 hours.