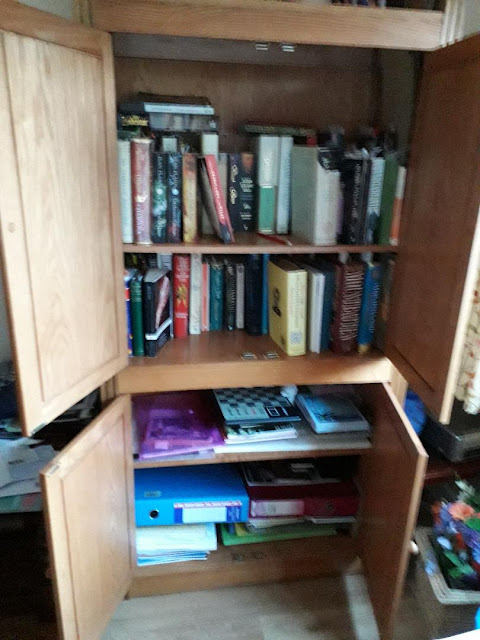 Courtesy of "Clerk of Oxford" :

It does no good to tell all truths or blame all wrongs.

I have been leaning very heavily on this Old English Wisdom in the last two months. First there was a cataclysmic row with my husband.  The easement of lockdown has certainly released devils into the air which were suppressed during the months of literal containment.  I overheard him telling his mother on the phone (she is very deaf, so he was shouting), that I was a nightmare and he finds it expedient to tell lies (I already knew this), by saying the opposite of what he means in order to get his own way, because in his view, I just say no to be awkward.   There were other things.  I initially told hub that I had heard everything, and was really upset, but I have not brought this up again, and have not mentioned any of it to mother-in-law.

Secondly, his mother (nearly 97) came to stay for a week.  I said nothing untoward for the whole week, despite some provocation.  We hosted two Christmas-size family gatherings during the ten day period of her stay. As I have mentioned before, Hub's determination to outdo himself in terms of all-day fancy cooking marathons can be quite taxing.   The washing-up went on for hours.

Sister-in-law (70), caused problems by eating lunch elsewhere while we were waiting for her and her partner to arrive for the big meal.  They finally arrived two and a half hours late.  I had  removed their places from the table, but they sat down anyway at the empty places, looking expectant, and ate their full portions.  I am particularly pleased that I forced a cheerful smile and said it was no problem.

On the final day, after this big meal, I tripped over the cable for my laptop, and sprained my foot badly.  It still hurts, two and a half weeks later.  I did not blame the fact that I was tired and distracted, as I had been on my feet nearly all day laying tables, helping serve, washing up.  I blamed no-body, but sat down with my foot elevated listening to the guests, (notably sister-in-law) prowling about the premises wondering aloud whether there would be any further food offerings, and  mentioning tea and toast (it was about 7 pm by this time).

I remained seated, and when these ruminations became louder and more insistent, I announced that I had hurt my foot and was retiring to bed to rest it in an elevated position.  In bed is literally the only place where I can guarantee rest.  I heard hubby sorting out the tea and toast, and everyone finally left about 8.30 pm.

I have not mentioned any of this since to hubby or any family member, merely coasted on regardless.  I would have liked to be thanked, by hubby for being so welcoming to his mother (we had to install a stair-gate to stop her falling down the stairs, and a commode for the guest room).

I would have liked to have my patience and hard work acknowledged (the laundry for all the guests took three days in all).  I would have liked just some recognition that this enterprise took a week to prepare for.  Lockdown had meant that no-one had been in the house for eighteen months, and heaps of books, papers, and lockdown hoarding -(piles of dry goods, toilet rolls and detergents) - had to be cleared away in advance. This was one of the reasons I tripped, because re-arranging the furniture around my desk is needed to accommodate the nine people round the dining room table. The picture above shows some of the results of my tidying efforts.  Following the ten day visit, it took another half week to clear away and put the house back to how it is normally (obviously not  the piles of books and papers).

However I have said nothing, and cast no blame.  Due to painful foot, I have not been able to seek my usual solace out walking in the neighbouring fields, which is normally my happy place. 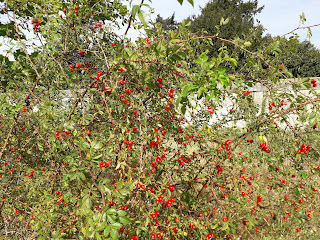 However, I think it was definitely all worth it,  as both Mother-in-law and elder daughter said that that it was like staying in a hotel.  Elder daughter's husband (quite a picky eater), said on eating hub's fruit flambe pudding, that hub had certainly surpassed himself there.

It remains to be seen whether I can maintain this Anglo-Saxon silence through the forthcoming repetition  of all the above at Christmas, and on into next year.