The Anglo Saxons by Marc Morris 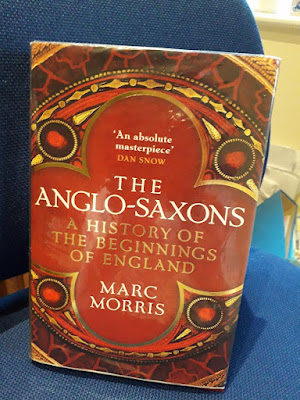 I finished this book yesterday, and have already ordered a copy of "The Norman Conquest", by the same author, since it will pick up the story at the exact moment this book leaves off.

That sounds like unqualified praise, but in fact I found the book quite hard to read, which surprised me. I own the author's "Edward I, A Great and Terrible King", a book I found extremely easy to follow.

My difficulties may have something to do with the very distance of the past in the case of the Anglo-Saxons.  One is used to following history in terms of:

a) Personalities.  Problem - in this period there are no personalities at all.  Even the great King Alfred fails to impress as a person.  (The story of the cakes is fiction, apparently).

b) Castles, churches, stately homes.  Problem - as the author points out, almost no buildings from this period have survived.  The Saxon churches in Northamptonshire, at Brixworth and Earls Barton, are notable exceptions, shown in the colour photograph sections. The Normans introduced the Castle system. Stately homes?  Not a trace, although the author points out that the mead hall as depicted in "Beowulf" is the nearest we get to a picture of actual living conditions in the lord's hall.

c) Family trees and successions, marriages, identifiable descents and interlinking of families. Problem - there is so little on record. Only one family tree is shown in the book, (it is spread over two pages but is one tree).  It starts with King Egbert - (who was he?) reigned 802 to 839, and ends with the line linking Edward the Confessor (ruled 1042 to 1066) and his brother-in-law Harold who was killed at the Battle of Hastings. Before 802, the individual are difficult to distinguish. Churchmen, who kept written records, are clearer characters in these early chapters.

d) Maps.  Ah, now here we are on to something.  The maps in this book are an invaluable guide to the period covered by the narrative.  Each chapter starts with a map, which depicts the towns, the regions, and the rivers which are significant in that chapter.  I found the maps a more helpful indication of what was going on than anything else. My only criticism is that the maps are undated.  Each would have benefited, in my opinion, from a title, giving the approximate period covered.

I do have some criticisms of the book.

1) I would not recommend anyone read this book on a Kindle.  The colour pictures and the maps are clear in hardback, but even in this, the top-quality of all formats, the black and white photographs inserted in the text are very unclear, being too dark, and in some cases totally useless as a portrayal of anything.

2)Another problem is the family tree.  In my experience with Kindle, a family tree has to be magnified each time it is consulted. In this case, the diagram needs to be consulted almost constantly once one gets past King Alfred.  There are just far too many people called Aethelwold, Aethelbald, Aethelberht, Aethelred, Aethelweard, Aelfweard, Aethelflaed, Aelfgifu, and Aethelstan. There is really nothing to distinguish them, because their birthdates are not recorded and there are no personalities to peg them.

3) There is no list of personae.  An alphabetical list of all those names, with at least an approximation of the years in which they were active, would have helped enormously as the author rips through the 600 years covered in the book. It became quite exhausting trying to identify them, as a lay person. For a trained historian, of course, it would be easy because there is nothing so easy and satisfying as reading a newly published version of things you already know.

4) Another criticism, is the author's apparent lack of interest in female characters in the story.

I already knew that Aethelflaed, daughter of King Alfred, was titled "The Lady of the Mercians" and famously constructed fortified towns ("burghs")around Western Mercia, but had I not known this, I would have been none the wiser after reading the very brief reference to her in this book.  I was disappointed that she was dismissed so briefly, and not even the specific burghs she constructed were named.  A new statue of her was recently unveiled, to commemorate the anniversary of her death in 918.  There was already a very impressive statue in Tamworth, to commemorate her achievements.

St Hild of Whitby does get a mention, but only in the context of the epic ecclesiastical row about when Easter should be celebrated.

No mention at all of these other significant ladies- Coenburga (Quenburga) (died c.735). She co-founded a double monastery at Winburnan (Wimborne, Dorset) with her sister Cuthburga.

The name echoes that of Kyneburgha (a hundred years earlier, mid 7th century), who likewise founded a monastery with her sister, Kyneswitha. These women were something, before the days of feminism, but utterly absent from the book.

The book succeeds as a political history, showing how the warring factions of the early tribes fresh off their boats from across the North Sea, were forced, by centuries of constant battles and punishments, into the shape of one kingdom, the England we know today.

In other ways it is a disappointment.

Hasn't stopped me, though, in my quest to learn more, hence I've ordered "The Norman Conquest".