I am a great fan of the public library system, and have written here about my first library book, which I "borrowed" (in fact my mother handled the entire transaction) at the age of five.

And here about the efforts of the public library to interest me in e-books.  My scorn, expressed ten years ago, has been replaced by delight, especially since the pandemic when the public library buildings were closed for months on end. Many wonderful books could be accessed, at the touch of a phone screen, and audiobooks could be downloaded free of charge. I have written here about the many audiobooks I listened to last year, and every single one was a free download from one of two library websites. One is called "Borrowbox" and the other is called "Libby".

A further delight offered by the library Libby app is the unlimited quantity of magazines available to read online. Downloading a magazine does not affect the number of books or audiobooks you are allowed to borrow at any one time.

You can read the Radio Times, (this does require some patience in scrolling, as the pages are so full of tiny boxes).  You can read "Hello" (if you want to catch up with the latest pictures of William and Kate). You can read "The New Yorker".

Now, I spent much of my youth reading stories from The New Yorker, anthologised (my copy is shown below) 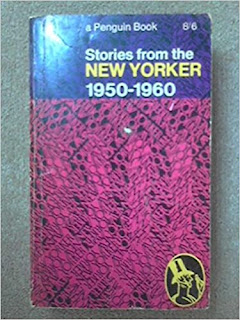 in paperback form. I still have a copy of this book, in this exact edition, increasingly fragile and yellowing, as it dates back 60 years. My ideal short story, as showcased in this collection,  is encapsulated by a conversational ambience, a comfortable feeling of fireside chat, a homely, yet educated tone, (one often emerging from an older, immigrant, poverty-soaked childhood), an emphasis on family, childhood memories, and family relationships.
When I read the complete edition of Sylvia Path's letters, I was intrigued to note that one of her great ambitions was to have a story published in The New Yorker.  The magazine accepted many of her poems, but her ambition for a story was not realised.  This was comforting to me. When a writer has become a legend, it is sometimes hard to imagine that they ever failed at anything.  This brings Sylvia to life as an ordinary human being, a new perspective.

So when I discovered that I was able to access every weekly edition of the magazine online, free, and peruse at my leisure, I was delighted.  I homed in first on the stories. Stories these days encompass every type, every background, every type of voice. Some of them I just can't find interesting.

At other times, the story is pure genius, which is hard to define.  An example is anything by the Chinese born scientist, Yiyun Li. Here is a novel which I strongly recommend, as a good indication of her political depth, historical knowledge, and emotional intensity. You can also listen to an episode of BBC World Book Club here, in which she talks about this novel.  Yiyun Li was born in China, so brings a very different background to the table, also being a scientist she is not the usual type of writer.

Many stories in The New Yorker, however, appear to me to be both pointless and boring.  If nothing happens, I struggle to see why the story is deemed to be worthy of publication.

I am an eternal seeker after the next interesting story, so I persist.  This week I am reading the magazine edition of 17th January, and have devoured the first of my chosen items of interest, an interview with the New York based writer, Hanya Yanagihara.

As a subscriber to "Goodreads" and "Guardian Books" website newsletters, I have already come across this author's name as one to look out for on lists of the best books to be published in 2022. Her new book is called "To Paradise."

She is best known for her second published book, which appeared in 2015, called "A Little Life".  I have owned a copy of "A Little life" for some years now, and have yet to read a page of it.  The fact that it is 700 pages long is of less importance than the reviews, which all emphasise the content as being terribly upsetting, largely about appalling physical torture and abuse. This has put me off.  The new book, following three timelines, 1892, 1992, and 2092, in New York, sounds interesting, so I read the interview.

As is sometimes the case, I found the author herself (as portrayed in the interview) far more intriguing than the book itself.

She spent fifteen years writing her first book, "People Who Live in Trees"which seems like an incredible marathon.  A triumph of self-belief. It was little thought of at the time, and was quickly completely overshadowed by her second, "A Little Life".

She spent 18 months writing this, her second book, a 1,000 page long manuscript, writing between nine and midnight every evening, and through the weekend.

Why do the numbers grip me more than the content? I am not sure.  All I can say is that I find her own life, as viewed and interpreted by the New Yorker interviewer, far more fascinating than the idea of reading a lengthy tome about torture and abuse, however well reviewed.  I went to my upstairs bookcase and brought down my copy of "A Little Life" to my downstairs bookcase, in case I should feel the need to dip into it.  I haven't felt this need yet.

I think what I really find fascinating is how diverse writers are, how their lives are so different from mine, how they scintillate with visions which they translate into words.  Some of these word-pictures I find entrancing, some moderately interesting  and some completely boring.  But the individuals themselves, the writers, each one completely an entirely unique human being - now THAT is interesting.