To Paradise, by Hanya Yanagihara 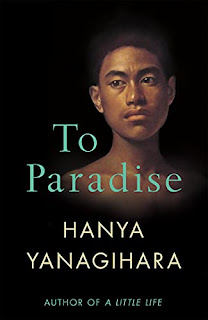 I've now read this book, by an author  referred to in the previous post, in which I reported on an interview  found in "The New Yorker."

It's extremely rare that I turn back to the beginning to read again any book I have just completed.  The last time it happened was with Hilary Mantel's personal memoir, "Giving Up The Ghost".

"To Paradise" is long, and divided into three sections - 1892, 1992, and 2092.  The sections are connected by what appear to be members of two or three families, the Binghams, the Griffiths, and the Bishops.  Characters from the first section turn out to be the grandparents and great-grandparents, and later the great-great grandparents of those who appear in the later sections.

Another common theme is that all the main characters are gay men, and in fact, the writer depicts these sometimes successful, sometimes failed relationships with such skill, delicacy and empathy that I had to look the author up again to make sure that it is not a man.  I'm not sure why this is such an important theme, as the successes and (more often) failures are similar to those of any relationship.  There is also the common theme of discrimination, which runs throughout the novel.The main characters in each section are discriminated against, usually on grounds of their sexuality, but also on racial grounds and even on the grounds of their political and social position.

The theme of the total destruction of the world as we know it is what hits hardest. As our homes sizzled in hitherto unheard of 40 degree temperatures, I was reading of environments devoid of trees - they had wilted to death in constant and relentless heat. As we were warned of hosepipe bans, I read of water shortages such that showering took place in communal "air showers" and even these were strictly rationed.  News footage of wildfires accompanied me as I read of the exhaustion of the emergency services  dealing with fires following hard on the heels of devastating floods.

The recent pandemic of Co-vid 19 (which is not over yet) runs through the book - a relentless series of pandemic waves pouring over the world in all too realistic detail.  The great skill of a good dystopian novel is to select actual, factual elements from the world around us, then weave them into a narrative of imagined characters set against recognizable backdrops. The backdrops are altered just enough to make the settings scary and the events are exaggerated just enough to convince the reader that this could be us, if things should, (as the narrative insists that they will ) get  worse.

It's possible to trace the apocalyptic climaxes in the third section back to events and human activities from the first and second parts.  The middle section is particularly vivid in its depiction of the island of Hawaii, notable for desecration by human activity.  The words of a Joni Mitchell song rang in my ears throughout - "They paved paradise, and put up a car park."

The first time I read the book, I concluded that the "Paradise" of the title was death.  Some of the main characters actively wish for death, others can only achieve peace via death. And the mess humans have made of the planet seems a fitting reason why death is the only solution for human beings.

Near the end, we are given an ancient fable about a lizard which ate and ate and ate every leaf, blade of grass, fruit, fish,  anything it could, because it had to eat to stay alive.  Its whole purpose was simply to eat and stay alive.  Naturally it ended up destroying its habitat until there was nothing left to eat.  Ah, we think, a perfect image for the human race, destroying its environment - then humans will die out completely and that will be the end of it.  But the lizard doesn't die, it returns, as a creature walking upright, and the environment gradually regenerates.  The narrator in this section reflects that some will die, but others will "keep doing what we always have ... doing what our nature compels us to ..."

The second reading made me think the complete opposite.   Life is an ongoing gift, which we should never reject by pessimism and defeatism. The majority of us will not in any case choose to reject, but are driven on by the impulse to survive.